Despite being a total pain in the ass for somebody who lives in Manhattan, I can't help but love squirrels. It's probably the tails. The whole reason I made this incredibly stupid list. Reading Emma, I was really happy to see such a cute squirrel as a character, and I got to thinking about how few squirrels there are in general media, especially compared to dogs and the like. I wanted to make a resource specifically to honor cute squirrel characters, and then I figured I would do one for frogs too, and bunnies, and penguins, and cats, and things spun out of control. I don't even understand the purpose of these lists as a resource, because how is this information helpful in any way? But I've been having fun, so I suppose that's all that matters.

The Risky Brothers ~ One Piece 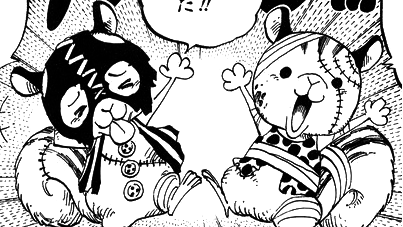 Despite being one of my favorite animals from one of my favorite manga, I kind of forgot that these guys existed up until now... they're cute I guess, but I prefer realistic animals to overly cartoony ones, so that may be why they didn't stand out to me very much.

Pokemon offers us Pachirisu and Emolga, both of which bear a striking resemblance to a certain fellow electric type pokemon of which I dare not speak... I actually like Emolga a lot, despite the afformentioned complaint; I just wish it had an evolution or something to make it more creative. Pachirisu, on the other hand, is a little too overly-cutesy for me (though I admit, that little tail wag it's doing in its sprite is slowly winning me over).

Animal Crossing has a nice collection of squirrels. My favorite is Marshal, but I also like Sylvana and Caroline a lot. The others are mostly alright; some of them have wonky eyes, and I wish that Mint had a better starting outfit. 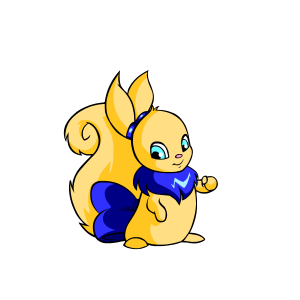 As a squirrel enthusiast, Usul was naturally my first pick when I (re)joined neopets in middle school. I honestly don't remember what my original favorite was when I was six, but it was probably something I wouldn't care for now. My Usul has a red ribbon and is named Cedirae, for some reason. I guess I wanted to find something creative but still kind of name-like so that I wouldn't have to stick random numbers at the end?

Here are some other Usul patterns that I like: 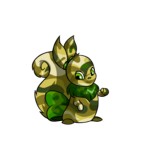